It was a simpler time. I’d just become a trusted player, and wanted to make something dramatic.

Ooo—there’s the maproom teleportation destination, but otherwise not much going on at 5000 West. And it’s beautiful. 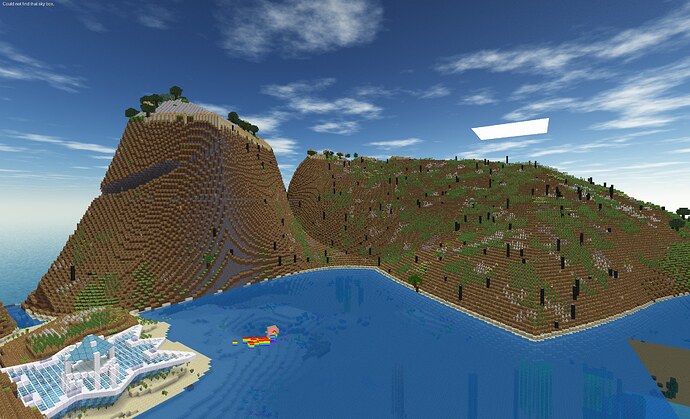 I hatched a plan, and did the math. To do it right, I’d need almost a full 4 gold chests of 90 stacks of 99 blocks. So I made some drills and headed out somewhere else to destroy the environment make a new tunnel in a remote clay-rich area.

I like the kingdom’s gates and I also wanted to incorporate a road, but the big idea was still a statue… “on the inside, facing out” like a guard. But then where will the road go—through the statue?

I eventually decided to go under. Here’s the first segment of tunnel to the next valley, through the mountain minetest isn’t showing right now

. By road and skyway and bridge and tunnel, it now connects 5000 West all the way to 0. 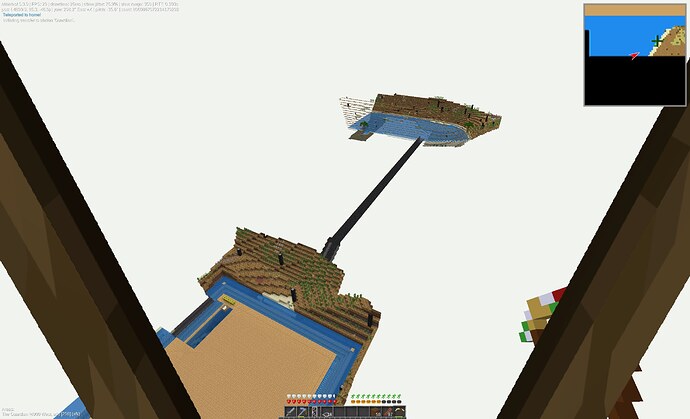 Inside afk’s head at the time:

“The statue base could start exactly at sea level—that would be cool! The foundation will be below 0, so the construction up starts at 1. And that means the first part of the road going under it all will just be a tunnel through all the water of the bay [ seen in the first screenshot ↑ ]. Hmm. I know! I’ll make a glass tube, and then just remove all the water.” 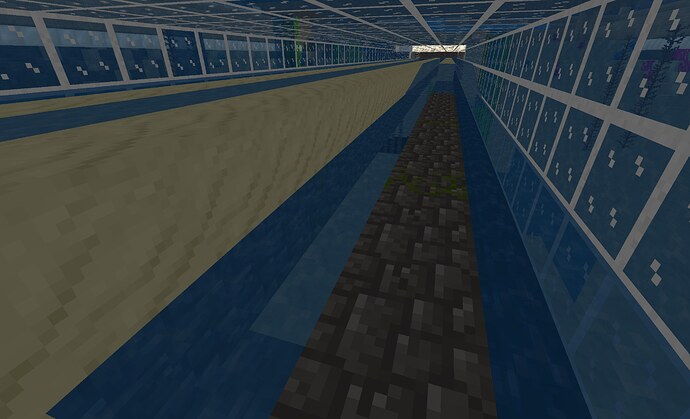 water source2560×1555 357 KB
There’s no “just” about that process. What a chore. God bless whoever did 700 East—I hope they had creative. Water source nodes replicate, so one must also be a bit thoughtful when removing them. Finally done: 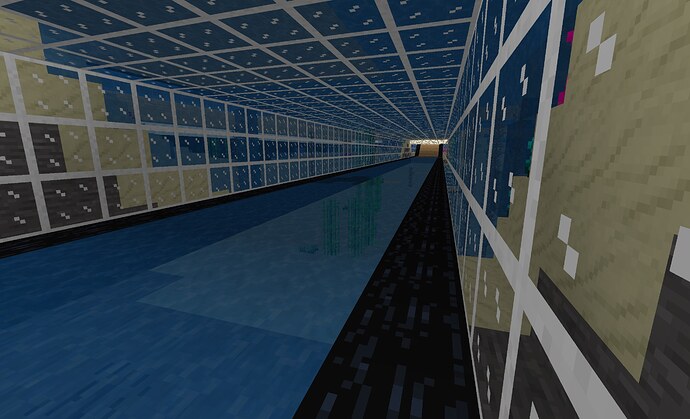 And some days later… ✓ Road to the kingdom done. Time for more water removal

I wanted the sea to flow down spillways completely surrounding the brick foundation, a forever-flowing cascade with the foundation hovering above it. Sorry for the boring pics, but I spent so long on it I can’t leave it out. Cofferdams for the 4-deep, 55 × 85 “well” under the statue foundation: 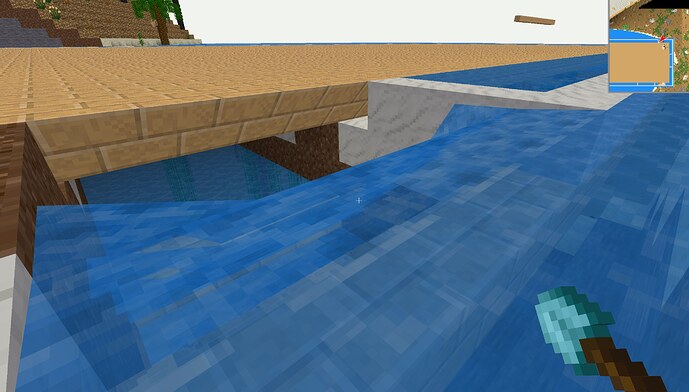 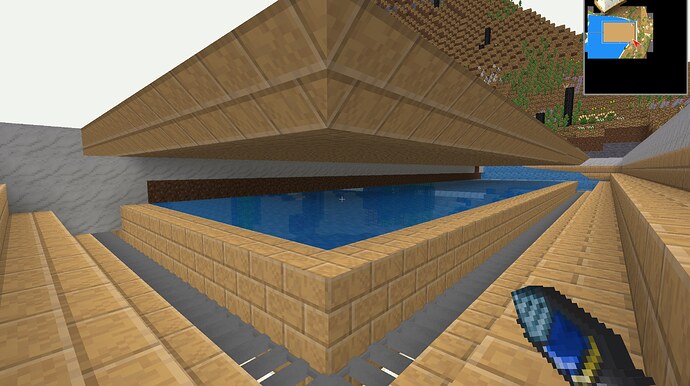 Water finally gone, time to re-flood it all 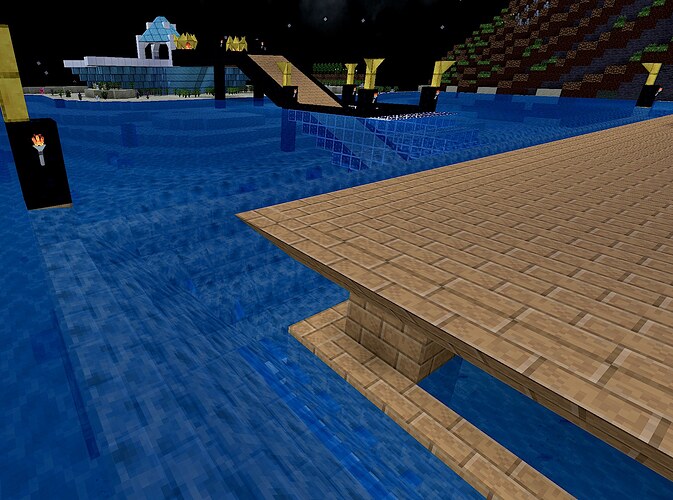 cascade1959×1455 619 KB
• with the road starting at the teleport station, diving underwater on its way to the glass tube and off to the kingdom
• the statue foundation at sea level
• and the ocean spilling down underneath it on all sides.

And then dotti happened. Time to stop all work and go do something for the kingdom for two months

All for the best. I love noobs and think the Illuna Science Museum is a good thing.

And in the back of my mind I had this epic canvas calling to me: 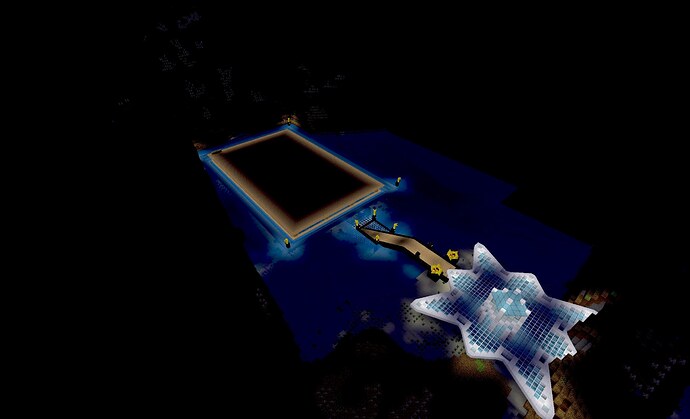 Fast-forward. The museum is done. Time for a statue.

Years back, I discovered point clouds, and apps for creating computer models of real-world objects. I called in a favor from a friend, went to an IRL museum, set up a mounting/rotating armature holding an ancient Egyptian statue; the cat form of Bastet. We then took ≈270 pictures of it from every* angle. (*where “every”==270). Then I worked with the software to turn the pictures into a point cloud, then a textured 3D model.

Now these days with coding, game design, Blender, consumer-grade 3D printers, and laser cutters becoming mainstream, there are apps and even just websites that can do a lot with 3D models. So I had a “voxelizer” pack my old 3D model into cubes (voxels, the blocks minetest runs on), and then cut that up into slices. A real object, hand-molded thousands of years ago, now a map for a minetest build! 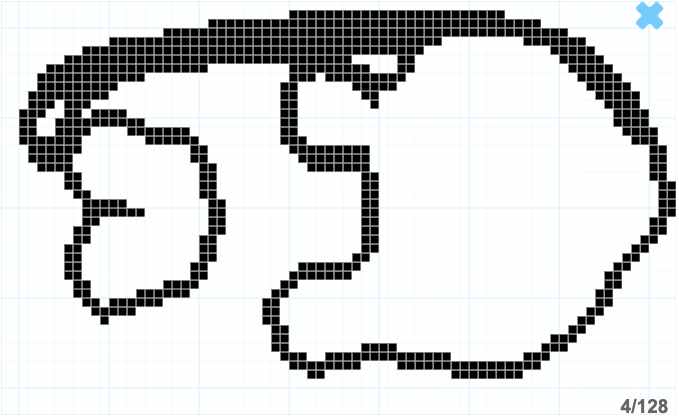 Look at that picture though, and imagine laying it out in minetest. That’s one level. I made the statue 128 levels high. It is taller than the mountain next to it. I also glided down after each layer to take a couple screenshots from the ground. If the museum was a “labor of love,” well, this was a “labor of hate”

. Incredibly tedious and fiddly. I’d wake up in a cold sweat after nightmares of an off-by-one error two layers down. I’m joking, but I truly did wonder a few times if I’d bitten off more than I could chew. 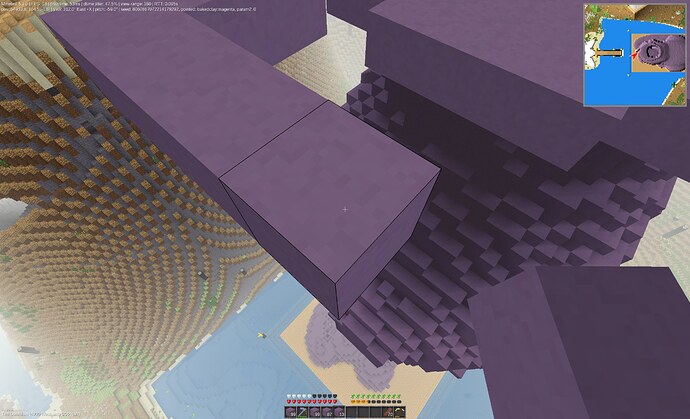 I wanted the actual statue to be faithful to the real thing, down to the block. So I finished that first and then later used leaves as floating scaffolding for statue decoration work. 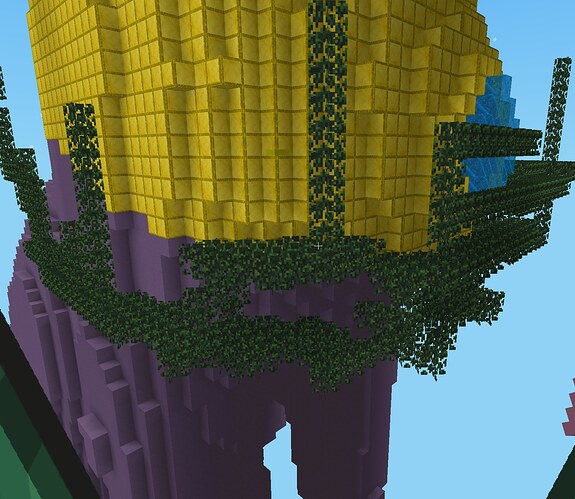 It’s finished. No creative, no robots, no fly. The core statue is thirty-four thousand one hundred thirty-nine blocks, placed by hand. 8 hours on the foundation and such. 36 hours on the statue. 2 hours guilding. (*34.139 blocks if I’d made no mistakes—I’m sure I did.

The original goal; a road from the TC all the way to 5000 West, and an imposing figure greeting people coming in:

I much prefer to see builds in-game. You could run there (head west!). You could maproom it (the big W!). If you really want to take a look though, bring binoculars and a glider, and use my TravelBox (‘afk’—in the A section), and go to the station “Guardian Perch”, which is on a tiny natural floating island in front of and higher than the statue. 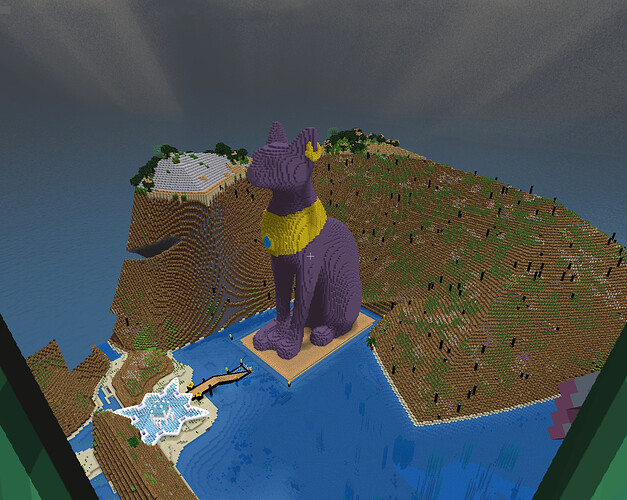 Holy cat!
You insane … crazy dude!
Amazing! Love it. But what about the eyes?

Can’t wait for you build your miner village.

I just love the dedication for everything this post contains, keep up the great work!

Thanks for the kind comments and DMs everyone

. Illuna is an amazing place and community. I’m happy to participate.

The eyes are closed and unpainted in the original statuette. I love being creative, but this project was aiming for faithful reproduction.

So, to answer the DMs, explain a bit, and give credit where it’s due—here’re some details.

Software can look through many photos of the same subject, taken from many different angles, figure out where the camera was in each pic, combine every high-confidence pixel of each photo into a single “point cloud” in 3D space. Some solutions can further take point clouds and consolidate them into surfaces; traditional 3D models.

The… “photos, to point cloud, to triangles, to closed 3D model” solution I used back in the day was a now-dead service (eaten by their camera apps, then killed altogether?). It was called Microsoft Photosynth. I can’t be bothered to link to them, but there are some amazing videos of its capabilities (and its parent tech, Seadragon) floating around.

As for right now, I understand there are multiple alternatives, though I have not tried any save for MeshLab, which lacked in some major ways but is very useful, and FOSS!

At the time, I did model processing and repair in [then Alias, now AutoDesk] Maya and a bit more in Rhino. They are both still around, but have loooong learning curves and for many reasons I cannot recommend them.

For minetest application, I used the amazing, FOSS app Blender to simplify the original, insanely-huge 3D model, and then export it to .stl format.

Finally, the star of the show: I used drububu.com to do the voxelizing and slicing. I actually found it upon discovering its papercraft tool. It also has a lego-izer and several other nice tools. 7 ⁄ 5 — would recommend!

Epic statue! I also like the pedestal with the water flow and the gold pieces.
I wonder if this is the original color? What material is the real statue made of?
And don’t know if you know, but there is a way on Illuna getting infinite clay in survival without digging it
(and dyes can be bought from the market)…

@Dirk What is the infinite clay secret?

You get clay by running the centrifuge with dirt

NOW YOU TELL ME!

Just kidding. I guess I never thought to question my source. It was always going to be mining

I like doing things the hard way. Or maybe “the fun way?” and I just like mining more than crafting.

The original looked like a solid piece of purple-gray stone. So the hue of the magenta baked clay is about right—it’s just way, way too saturated. That’s the minetest color palette for ya. I was not permitted to handle the original. I don’t even have the pictures or point cloud anymore—probably went into some grad student’s thesis. The gold around the gem/glass also had sections with intricate patterns; links and concentric circles, maybe an animal? I can’t tell much from the model, and anyway; it would be way too much detail for block-by-block representation in minetest, even at that huge scale.

Thanks again for checking it out, the kind comments, and tips! Cheers.

so thats what came out from that pedestal

very nice building!
but the real deal is the effort you’ve put into it to make it real, and thats what i admire a lot as a builder!
not much people have the kind of dedication and patience

i really like the timelapse you made. how did you do it ? you used an alternate account ? it appears too far away for it to load the process of the building properly…

Yeah. I was actually a bit sad how much the time-lapses just looked like a video editor’s “vertical wipe” transition. To make them, after each layer was done, I’d just glide over to the same two spots, toggle the gui off, crank up my view distance, and capture screengrabs. I had to stay in the area for my client to keep the mountains cached, and jump around to force them to load if they dropped or I had quit. It was a nice break from sneaking and placing, but still a bit annoying. If I ever wanted another minetest time-lapse, I’d sooner write a mod.

Even backing into the same corner and standing on the same peak each time, I guess the head-bob left the camera in a slightly different place each frame. And even with the same skybox of course the clouds*/sun/moon/stars were different in each shot, so when I had all the frames it still needed some post work. (*until I looked up how to turn them off forever

After Effects for my other life, so I did a camera tracker for shot stabilization and a matte for background-replacement to substitute-in a nice empty sky. Started more like this:

@Dirk Thanks, now I have a machine to make infinite clay. It is slow because 4 stacks of clay blocks require about 24 stacks of cobble (when the gravel is fed back into it), and a single cobble generator takes a while to produce that much.

@afk while barely leaving their base, heh, automate all the things!

ah, okay that was my guess. stabilization and background “management”.

i was hoping you found a new and easier way to capture stuff, its been my dream to make timelapse vids of my buildings:) but sadly its impossible in those scales due to the poor loading distance.