Check out the redecorating at spawn, TC, etc. Hunt some flying jack o lanterns for a chance at nice drops. Then if you dare, head in the gate across from the TC main entrance and stand in terror at the feet of the Spider! Change your pants, then head for the far left corner of the web—yes, you can run right across the web and lava—and into the jack-o-lantern library. Inside, the nightmare begins. If your character survives, (and if your willpower survives!), you’ll walk away with more Treats than Tricks!

Giant kudos to Ruthie, who made basically the entire maze. (And kudos to dotti, and Milan, and Elvas, and everyone else who I’m sure had a hand in it! Sorry if I didn’t know you were involved (planning was secret, and I’m still getting to know everyone

) Feel encouraged to reply here and give someone or yourself some credit for the hard work, or tell “war stories” from construction!).

I’ve seen some deep frustration in chat. If you want to get some progress, but are feeling utterly lost or frustrated, read on for some tips. I will not spell out exact steps, but each tip is progressively more revealing. Don’t reveal too much and spoil your own sufferin er… I mean enjoyment!

Wander around. This is not a spoiler—c’mon. It’s pretty amazing! Explore it

So, read the signs at the entrance.

No really, read the signs at the entrance. Maybe “read into it” a bit even.

Yes, the main challenge is the maze. But eyes up!—staring at the floor to keep your sense of direction, or maybe even just straight ahead might make you miss some buttons and signs up kinda high.

The green-walled dungeon has a much simpler floor plan than the maze. You could map it in a couple minutes, but don’t bother.

Being banished from the maze to the dungeon is not failure.

The dungeon teleportation pad room signs have the same message, but I’d say it’s a bit of a Trick.

The dungeon teleportation pad room is not what I assumed at first; “a convenient way to start over, or maybe get lucky by appearing a bit away from the start of the maze”

That is, the path to escape is not reachable from the entrance! At least pop open a map and even though you can’t see the maze, you’ll at least know where you are relative to the spider and her web/ the grounds.

I got a prize and a message from the ghost of Ruthie!

No. Escaping the wrath of the spider is still the goal. You’ll know.

“Key”? What key?! The spirit of Ruthie said you have the key. You have the key.
[Though if you see that sign, look down, and see a pit and stairs, the door is already open—true story.]

No, really; what key? You read the signs at the entrance, right? You had the key before you entered.

So, funny story. I said in chat that I was considering sketching out a little map. Dotti encouraged me to go ahead with that. I literally started on a napkin. That quickly got out of control. Then I did a binary tree of choices instead of a map. It has loops. It was a nightmare. I then moved on to really mapping it. And I now think dotti “urging you on” can sometimes be almost as evil devious as Ruthie’s maze 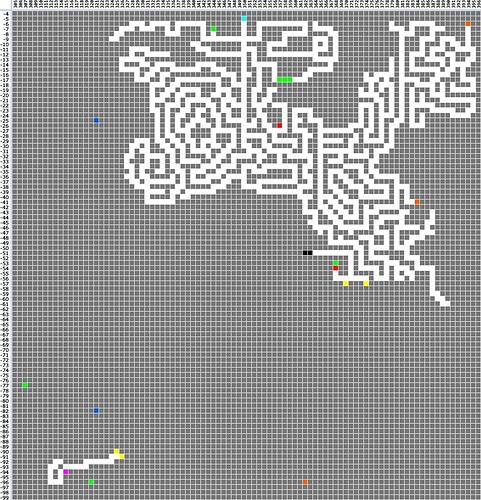 I won accidentally, and I think I bypassed at least two features because of broken machines. I can only hope the above is not terrible advice.

If you’ve met the spider royalty and lived to tell the tale—congrats! You’ve reached the actual end!

The scythe fires lava slime ball ammo like the bow fires arrows; to the left in your hot bar. I’ve gotten them from those cube shaped lava slimes (in lava-y caves, lava geomoria, and lava castle biomes). Heard you may also get them “from testplants in red biomes” (like the ones around the web right now?). Right-click/secondary-fire may spawn a flying helper.

Thanks again all for a great event! Happy Halloween everyone!

p.s. Yes, Elvas, I am curios and nosy and translate everything I can’t read

p.p.s. Creative type with good taste who cares about design decisions and has a few minutes to spare? See my travelbox (immediate left just inside TC) to offer suggestions on a building material for my first decent-sized project, since I just earned Trusted_Player and want to do an art piece.

I have only been able to play ~30 second a day due to a persistent headache, hopefully I won’t need the map you got nerd sniped into creating.

But you can get the ammo by punching the plants in the fire biome. Place one inside a protection and the slimes die after spawning, unless you punch them before they die. Add a vacuum tube and chest, and you can lazily punch the plant every 2 seconds or so while watching youtube or something. 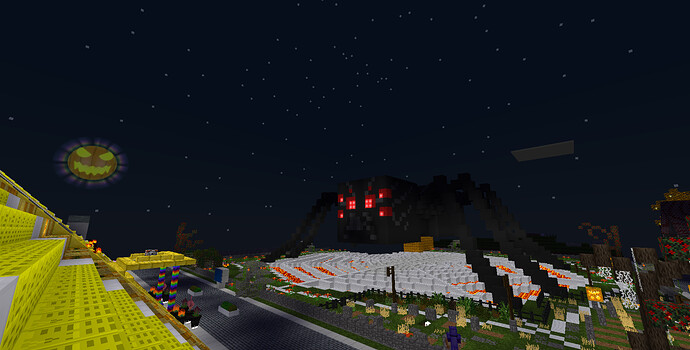 OH MY GOD ! This looks like the most hard-working event all time, or am I wrong ? I’ll definitely have to ask Grand to try it ! I mean, not GW of course. All I can say at the moment is “BRAVO” for all the work !

So I take back all hints relating to the key. I have since returned to that particular door and confirmed that I did not operate it as intended… it was left open for me by someone else. I’ve since closed it, heh.

Oh, and I may have overstated the presence of royalty at one point. On second viewing, they’re all just nice spooky decorations. You’ll still know it when you are done done though.